(1962) writ & dir: Pat Boyette; w/ Russ Harvey, Helen Hogan, William McNulty. No skin; no gore.
Some castaways wind up on the island of Count De Sade. Oops. The Count is almost as batty as the screenwriter — depravities ensue. Of course, this thing banks entirely on the exploitation elements, but what’s there (a little bondage, a little torture) is brief and rather tepid. What makes the flick worth watching are the dime-store SFX, the wooden acting, the ridiculously hammy acting, inappropriate canned music, and dialogue so stiff it could stop a bullet. It might make a good party movie, but you’ll have to work at it a bit.

(1971 – Be/Fr/Ger – aka Les Levres Rouges) dir: Harry Kümel; w/ Delphine Seyrig, John Karlen, Danielle Ouimet, Andrea Rau. Some skin; no gore.
Countess Bathory is still around and shows up at a swank hotel looking for her next youth treatment. At first, this looks like we’re going to get a stylish and artsy, but formulaic, take on the sexy vampire shtick. But then it starts to show some nicely nasty, dark twists and turns. Sadly, the filmmakers had disposed of such frivolities as ‘plot’ and all those ideas go unused; essentially nothing more than red herrings. And so we plod on (so very slowly) until we get to the predictably vacuous ending. Okay, the flick looks good and Seyrig almost makes it worth our time, but it’s still just a braindead collage of scenes. Really, these people could have spent the time to give us a documentary on the sex lives of flounders – it would certainly have had a better story and probably been more erotic. Yeesh. 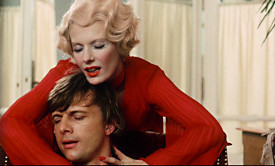 (2009 – Japan) writ & dir: Noboru Iguchi; w/ Aya Kiguchi, Hitomi Hasebe, Takumi Saitoh. No skin; mild gore.
An evil corporation, cyborg assassins, the magic of sisterhood, and swords out the ass (literally… and that’s not mentioning the armpits). This is a frenzied and utterly gonzo farce that is filled to bursting with juvenile humor and abused body parts (and, um, abusive body parts). The budget is low, so the FX are cheap and simple, but it makes up for it with a non-stop parade of idiotic jokes and spurting blood. It would play best to rowdy 11-year-old boys — or a frat party after the first keg. I didn’t think it was near as good as Iguchi’s other flicks, but it certainly wasn’t dull.

A gang of bad young(ish) men steal a bus and rape some women. And that, I’m sure, is the sum total of the shooting script. The only sound is the canned music and the deathly-serious narrator; there appear to be no other humans on the planet besides our rapists and their victims; and the ladies really seem merely inconvenienced by rape. In fact, although this flick tries to sell itself as a ‘roughie’, 90% of the action is the same old softcore make-out scenes except with a narrator telling us how dreadful it is. There are some long stretches of dullness in spots, but it does deliver with quite a lot of topless fondling, which is as far as it gets. In its day, it was outrageous – but for anyone raised with the internet, this is a sleeping pill.

Viewing pornography is bad for ya, but actually running a girly magazine will drive you bonkers! I think this was trying to be a gritty sexual-tension drama. What we actually get is a bunch of painfully dull footage with some dime-novel narration that keeps promising that something awful will happen anytime soon now. The only awful thing that happens is the time wastage for all concerned. 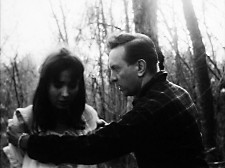 The sordid confessions of some young ladies trapped in the sordid life of a “party girl” (they never do actually use that sordid “P” word). Even in an era when guys would sit through anything for a glimpse of skin, this one must have been a punishing ordeal. It’s carried entirely by droning narration which never does get around to anything like a plot – you get a bunch of rather awkward burlesque routines, a bit of rape, a shower scene, and some bizarre attempts at “artsy” photography. But all of that is overshadowed by a whole damn lot of old newsreel footage because they desperately needed to pad the running time… yeesh.

Coke-dealing priests wind up on the short end of the vengeance shtick when an abused nun goes gangsta on them. Okay, it does actually deliver on the title, and manages to look good on a low budget. But the flick never does find a sense of style and winds up delivering exactly what we expect in an almost humdrum way. As a tribute to the old nunsploitation genre, it’s serviceable but lacks personality. How you can make a rape scene sleepy, I don’t know, but they did it about three times in this flick.

Bigfoot wants women! …but not for sex, apparently. We get skinny-dipping, belly-bumping, and bad guys with guns… this is a rather random assortment of footage, not all of which belongs in the same movie. For those who don’t fall asleep, this flick delivers none of what is promised, and tries to make up for it with a couple of soft-porn scenes dominated by guy-butt. It might be amusing for someone who’s never seen nudity before, though.

A flighty young lady abandons her dull husband and motors off across Europe in search of real satisfaction… which is embodied in a callous womanizer. This is one of those flicks that relies heavily on its audience being totally stoned. Anyone dumb enough to watch this sober might realize that all the lame attempts at psychedelia, the delusional flashbacks, and the droning monologue are really just… godawful dull. Although it professes to be a counter-culture, free-love film, it is plain that the filmmakers either failed to understand these sentiments or consciously rejected them. So they settle for a mish-mash of poorly realized ideas and repetitive footage – a shameful waste of a young woman in tight leather.